From now on I will be posting all content on my new blog host. Please change your bookmarks and come say hi.

Since I want to pay bills and take a vacation this summer (living the dream!), I thought
I would do a commission drive. Something new this time as well, I will color and print out
a hi-resolution copy of your commission and mail both the original and color version to you.
These spots are limited as I only have a short window open so let me know if you're interested.
11x17 b/w commission (1 character, minimal b/g) = $50 (Additional characters $15)
With 11x17 color print + $40
9x12 b/w commission (1 character, minimal b/g) = $30 (Additional characters $10)
with 9x12 color print + $25
Add $7 for paypal fees, shipping and handling within the U.S.
Sketchcards with spot color are $20 + $2 s+h
I also have some left over stock from my spring conventions, if you're interested.
Sketchbook V2 (40 odd pages of sketches plus an original sketch on the back) = $5 (+$3 s+h)
ICARUS Convention edition, 30 pages of story + 10 pages of bonus material = $5 (+$3 s+h)
Paypal address is super75press@gmail.com
*Please note, if you want me to draw your original character, please contact me prior to payment.
Posted by Ryan Cody at 12:40 PM 2 comments:

This past weekend I was at The ACE Comic Expo in Albuquerque. We supertrucked out Thursday night and made the 320 miles in just over 4 hours. The drive between Flagstaff, AZ and the ALB is beautiful, lots of good scenery but the I-40 in New Mexico is terrible, they have no reflectors on the roads like we do here, so it was pitch black out and made the nighttime driving more stressful than it needed to be. We arrived at my good friend Shar's house around 11 and proceeded to catch up on old times.
Friday morning Shar and I headed over to the con and set-up. I had a great spot next to Andy Kuhn and Shannon Denton. The crowds for the show seemed small, I guess that was to be expected for a first-time show, and even on Saturday never seemed to get too busy. Shar hung out with me at the table for a good chunk so it was still good times even when it was slow. People seemed to really dig the prints I had on hand and I sold most of my stock. I only did a few commissions which seems to be the trend for me at cons lately, but they were fun ones. I also sold a handful of ICARUS and was able to talk about the book a bit. Overall the show exceeded expectations, even with the small crowds and is a solid addition to my convention rotation, I hope they invite me back again next year. My only criticism about the show would be that they seemed to charge a lot for admission. Their prices were comparable to the Phoenix show which is about 3 times as large. I noticed a large majority of the attendees were not buying anything and I wonder if the walk-up admission price had anything to do with that.
A couple highlights from the weekend.... James O'Barr, creator of The Crow, stopped by my table and picked up my sketchbooks. I did a quick Crow sketch on the back for him and we chatted for a quick bit about how over-rendered art sucks and brush-style is where it's at. Super cool guy. I also sold a Star Wars print to a guy who works at Lucasfilm, he picked up a couple more and said he would try and get one to the voice actress who plays Asoka, so that's neat. I met Chris Evans' Captain America stand-in. He was in town working on The Avengers, and I also met Mitch and Bettie Breitweiser. Besides being adorable, they are the nicest people ever. We also spoke about over-rendered artwork and talked color theory a bit. They were very nice, showed me some samples of books they are working on and gave me some coloring tips as well. So awesome.
Anyway, here are some pics from the weekend. 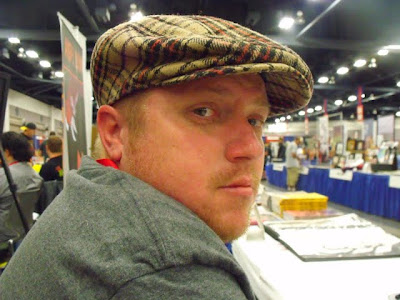 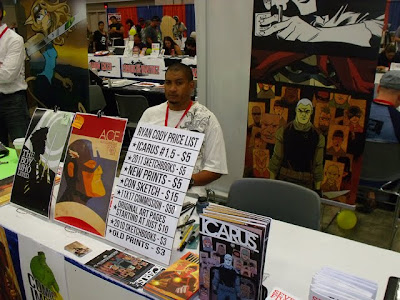 Shar at my table. Nice big table too. 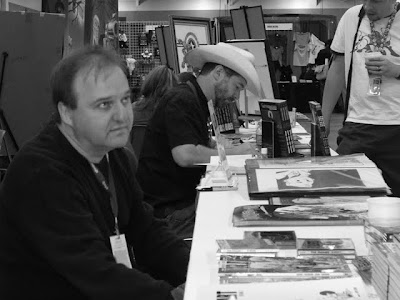 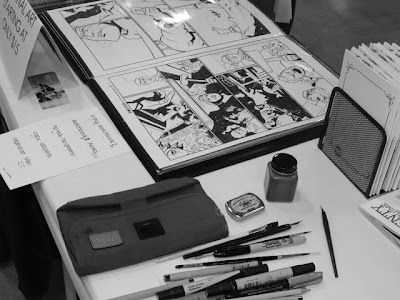 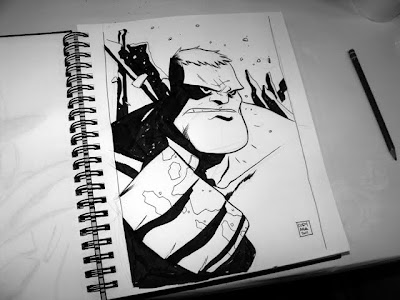 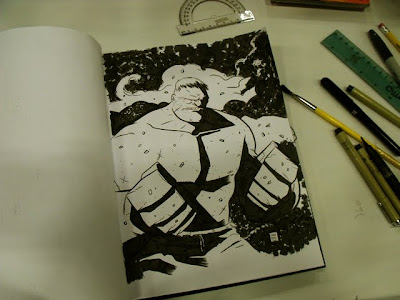 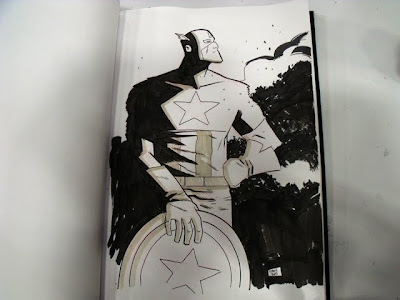 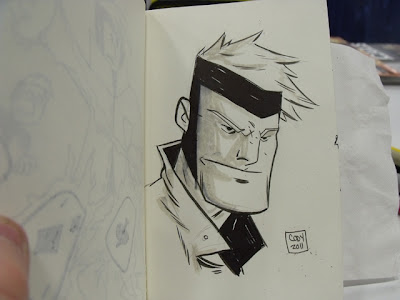 This weekend I will be at the ACE Comic Expo in Albuquerque. I will have convention edition copies of Icarus #1.5, the very popular Harry Potter prints, original artwork and a new sketchbook. This limited edition print will be selling for only $5, just like everything else.
Posted by Ryan Cody at 1:05 PM 2 comments:

How I would make it better - Green Lantern Movie

I just got back from watching the Green Lantern movie with my kids. I'm going to geek out a bit here, so just bear with me. Here's how I would have made the movie better, if they only had asked. If you have not seen the movie, and actually want to, you should stop reading now. Typos and lack of Green Lantern history sure to follow...
THE VILLAIN - The casting, except for Mark Strong/Sinestro and Michael Clarke Duncan as the voice of Kilowog was all wrong. Strong was the only actor who looked like he even gave a damn. If I were given the choice to write the movie I would have gotten rid of Parralax (who looked ridiculous) and Hammond who I, a heavy comic book reader between 1986-2000), had never even heard of. I would have started the movie out with the lantern corps coming back from a failed mission (possibly mentioning Parrallax here, therefore giving them a main villain for a sequel) and Sinestro being angry about the lack of power he had. He would then argue with Abin Sur over the creation of the yellow ring. Sinestro tricks the guardians into creating the ring, rebels against the Corps and mortally wounds Sur, who then crashes to Earth and seeks out Hal Jordan.
THE ORIGIN - Abin Sur gives the ring to Hal like always, when Hal questions what to do with it, Abin tells him that the ring will imbue him with the knowledge of the other Corpsmen who have owned it before. In one fell swoop we explain how Hal knows the oath, how his powers are supposed to work and how to manipulate them. More importantly, it conveys to him the importance of his new responsibility. They tried something similar in the movie that I don't think was explained enough. Hal is called to Oa for hands-on-training with Kilowog and Tomar Re, and admits to not being able to handle the pressure and responsibility. They tell him he is needed to help strengthen the corp in the wake of Sinestro's treachery.
- THE STORY - Hal struggles with the pressure, Carol Ferris could then serve a real point in helping him rebuild his confidence after he freaked out and crashed during a test flight at the beginning of the movie. Her love, and honoring the memory of his Father gives Hal something to fight for. Sinestro wants Abin Sur's ring, since Abin was one the most powerful Lanterns. He invades Earth and the entire third act could be a huge fight scene between the two, Battle: Los Angeles or Transformers style. Hal comes close to beating Sinestro but Sinestro's experience and hate fuels his power. At the end, Hal is willing to die to save Earth but the other corps members show up and Sinestro retreats. BOOM. Instant sequel where Sinestro builds his own corp in order to attack Oa.
Other nitpicks - the effects were terrible, as were the constructs Hal built. All of the creative (or in this case, non-creative) minds in Hollywood and they come up with him constructing a giant Matchbox car track to stop a falling helicopter and when he is being pulled into the sun, he conjures up two jets? Why not just create a super-fucking-awesome jetpack/booster on his back instead of being tethered to two jets? Ridiculous.
FINAL THOUGHTS - Lame effects, lame villains, lame casting. It should have been Green Lantern vs. Sinestro, instead of saving that for the sequel. Also, there is no real build up of Sinestro getting angry enough, or fed up enough to be putting on the yellow ring at the end of the movie. It made no sense other than to appeal to the fanboys.
Posted by Ryan Cody at 3:42 PM 2 comments: 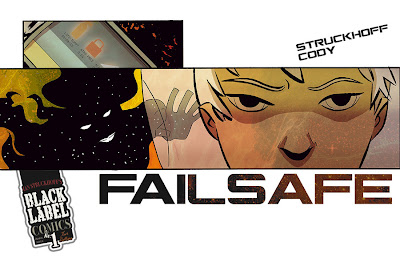 One of the next projects I hope to be working on soon is a one-shot/girl-in-space sci-fi mindbender called Failsafe. The project is contingent on funding so I will be linking and promoting the Kickstarter campaign once it's up and running, but here is a taste.
Posted by Ryan Cody at 8:35 AM 1 comment:

Back from Phoenix CC 2011 and I had a great time overall. Sales were up slightly, people seem to dig ICARUS and people LOVE Harry Potter, sold through most of my HP prints. On the other hand, they seem to loathe Clone Wars, only sold 1 of my Asoka Tana prints. Had a lot of fun hanging with my Comic Improv homies, Derrick J.D. John Dadicus West. Scott Godlewski and Ben Glendenning, even though I barely saw Ben he was so busy. Met some cool new artists and got to reconnect with my long lost love, Rob Osborne. It's always good to see local Phoenicians who have supported me over the years and to catch up with friends that I only see at cons. Next up for me is ACE Comic Expo, end of June in Albuquerque. Looking forward to it. Here is some stuff I drew for people at the con. 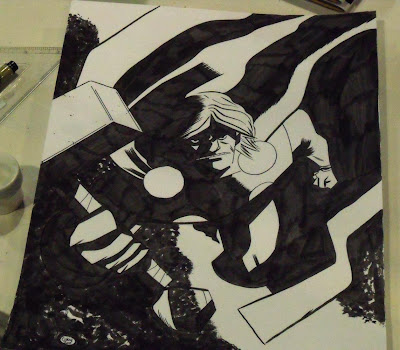 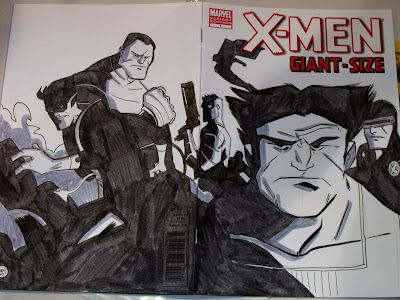 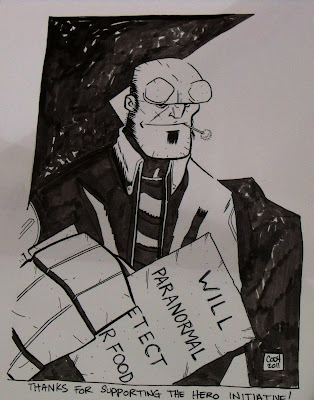 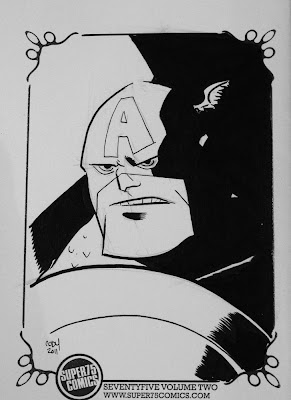 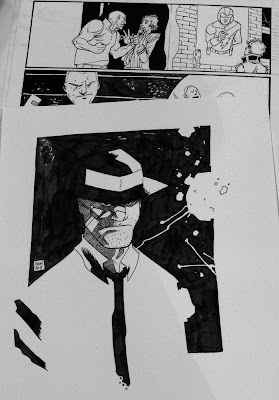 Shipping is included in the U.S. Add $10 for each additional characters, add $7 for international orders. Add $20 for digital colors & a hi-resolution file.

Viper Comics
VILLAINS #1-4; Collected as Vol.1 Thick as Thieves, The Expendable One Vol.2 Chp.2, Legends of The Middleman WW2